First order of Business, the pages: About, Cast, Archives, and Creator Contact is now up and running so check it out.

As many of you may know, LOST is coming to an end. Tonight’s episode “What They Died For” will be the last regular episode before the 2 and a half hour series finale on Sunday. I myself love series finales, sometimes I just watch the finale of show just to see how it ends. I love having a conclusion to the story, I love how the cast a crew give a proper send off and it always annoy me when a show gets canceled before its time. That’s why it’s such a great thing to see a show like LOST make it all the way to the end, ending on the creator’s terms no less. That’s a very rare occurrence in television.

Over the past few weeks I’ve been thinking about what made LOST so great. Many will say it’s the intriguing mysteries introduced but now I don’t think so. The mysteries and questions are a hook for the audience, but as the finale approaches I’m not thinking about where the food palette came from, why the DHARMA Initiative were studying polar bears, or even who built the four toed statue. And it’s not the sci-fi aspect because there are many shows that have used the same concepts LOST employs. In fact when I think of those science fiction examples I can’t believe they did it. I could sit and tell you about Flash forwards, time travel, and even alternate realities and most of you out there who have never seen LOST probably would get turned off by it. But every time they do one of these potentially shark jumping moments they pull if off. And it was then that I realized what made LOST work, why it was able to survive not only against a studio’s typically way of doing things but also for a large general audience. The creators have always said it but I just realized how right they are. It’s the characters, I actually care about them.

Usually shows have characters that are cool and interesting but they almost never really resonate with me that much on an emotional level. And that’s because of the unique structure of the show. Despite the claims that the show is too in depth and hard to get into, each episode is actually… well, episodic. With such a large cast they use each episode to focus on one character. Basically a series of short stories that are strung together by the present plot of survivors on an island. Giving both the writers a chance to really explore the character and the actors to give some of the best performances of their career. This format allows the audience to really understand and care about the character, which makes the ups and lows, the trials and deaths all the more meaningful. It even gets me to care about the love stories. Whether in TV, Films, or even books I always find romantic subplots insincere, unoriginal, predictable, unnecessary, and extremely boring. And I’m not referring to the main Jack/Kate love quadrangle, But Sun and Jin, Claire and Charlie, and most notably Desmond and Penny. I actually have feelings for their scenes, I want them to have happy endings. I hope for the best and get sad when things go bad, that has never happen to me before. I’ve never cried at a TV show before but a few scene throughout LOST brought me as close as I’ve ever been.

What makes the characters work is quality. This show has such great quality on almost every level: writing, directing, editing, acting, the music. They pull in from so many resources: philosophy, religion, science, even geek culture to create this all encompassing mythology. Scale of this show is so large there’s really nothing like it on television. And they pull it off with such great storytelling. I could probably go on forever on how all these things pull together to make such a great series, but this post probably got a bit boring. I’ll just end by saying I’d be stupid to say LOST is the best show on TV, because that’s just opinion. LOST may not be for everyone. Breaking Bad which is now in its third season is a fantastic series, but I just can’t get into it. It’s just not my thing an likewise LOST may not be for you. But if you have free time and looking to get into a show on DVD I highly recommend LOST. And after watching the Pilot episode you’ll know whether or not if it’s for you. So here’s to the LOST finale, a great show entering it’s final hours. To the writers, cast, and crew of at least 1,000 people who all made this show possible: 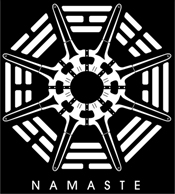 I also make T-shirts of this

UPDATE: I loved the finale. If you learn to Live Together, you’ll never Die Alone.

Almost nothing on tv comes close to Lost, I really enjoyed it