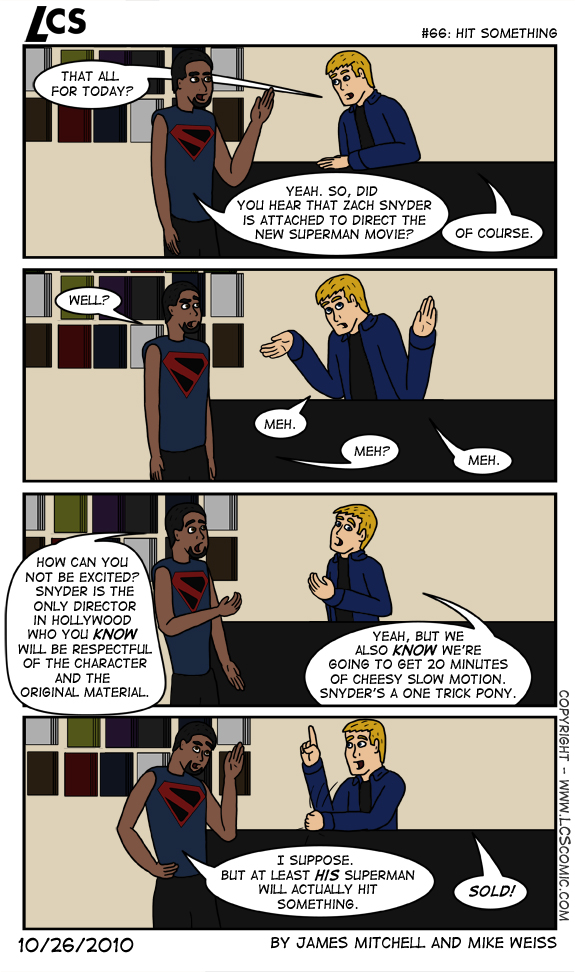 Mike: I actually liked Superman Returns, it did have it’s problems but I still enjoyed it. I don’t feel the problem was lack of punching, but that it was too stuck in the past. Superman, specifically Clark Kent, has changed a bit since the 70’s and a Superman movie should reflect that. I also hate it when directors get “typecast”. Like explosions and Michael Bay, twist and M. Night, Zynder always used slow motion well and appropriate for the type of movies. But once you become aware of their preferences it becomes painfully obvious when they use it. And sometimes that can take away from the film. Also I feel we’ve been missing great flying fight sequences. In this age of CGI you’d figure one film would have made a truly great flight-action scene by now. So here’s hoping Zynder can pull that off.

Also today’s customer is a friend of mine, Jon Carlo.

James: The two real problems with Superman Returns were making Supes into a mopey, deadbeat dad and having Luthor using a land scheme again. Talk about a one trick pony.

No punching was just the icing on the boring, self-indulgent cake.