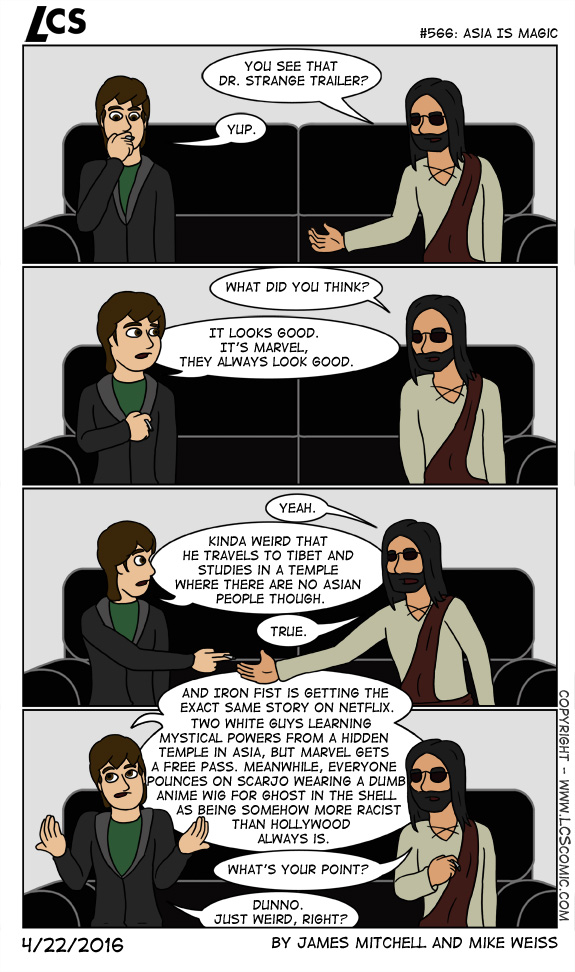 Mike: So I’ve thought about making a blog (or a youtube video like everyone else) on this subject but just haven’t found the time for it. When Scarlett Johansson was chosen I thought “great choice” then after reading about the controversy did I realize “oh right, that character is Japanese”. If the movie is going to be a western adaptation (i.e. taking place in the west) then I have no problem. If it’s taking place in Japan then that’s messed up. If that really pisses you off you should check out Max Landis‘ video. In it he says the movie industry isn’t trying to be racist, they’re just doing what they think will make them the most money, whether right or wrong that’s just what their concern is.

As for Dr. Strange and Iron Fist, I see it as a “damned if you do, damned if you don’t” situation. Before Finn Jones was cast as Iron Fist there were quite a few people who felt he should have been played by an Asian American. Mainly they were tired of the white savior cliche and the ideas that may support. Likewise there were people who specifically didn’t want an Asian American actor because it would just further a kung fu stereotype. Similarly in Dr. Strange they cast a white woman as the Ancient One, a character typically portrayed as an elderly Asian man. They could have cast someone closer to the comics but that would be a stereotypical role for older Asian men. Iron Fist decided to stay close to the source material, while Dr. Strange decided to try something different. Where they right or wrong? I honestly can’t say, sometimes it works out for the best and others it’s a missed opportunity. All I know is Marvel has been consistently great, specially with casting so I’m willing to give them the benefit of a doubt. And Ghost in the Shell is a great property and Scarlet Johansson is a great actress, I hope the trailer will tell us if it’s worth checking out.