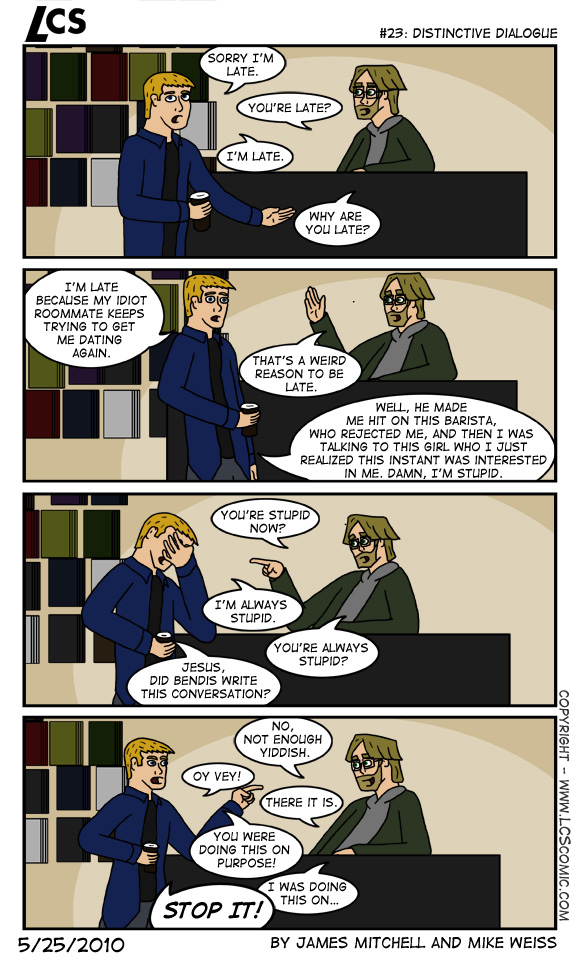 Mike: You, I’m guessing that many people out there assume that Beck is based off me. Really he’s only visually based on me, but ultimately he’s James’ creation. Though moments like the last line in panel 2 here freak me out, because that is truly the story of my life. I don’t know what voodoo magic James is using to spy on me, but it’s damn accurate. On the subject of Bendis, he’s an up and down writer. Sometimes his writing is great, other times it falls flat but something that has to go, is the redundant dialog he loves so much. It gets really painful to read with the amount he uses it.

James: Bendis can be a frustrating writer at times. Obviously I enjoy poking fun at his dialogue, but it’s his plotting that really lets you down sometimes. I like Bendis, I really do. He’s responsible for some of my favorite comics, but he’s kind of like that one ballplayer who never gets it done in the big games. You know the one. He’s great in the regular season, but he falls apart in the playoffs. Likewise, Bendis falls apart at the end of too many important stories. Too many of his comics, especially the events, end with the reader walking away disappointed. It sucks because you know he can do better. You know he must have learned how to handle an event comic by this point. You know these things. And then something like Siege #4 drops. Yeesh.