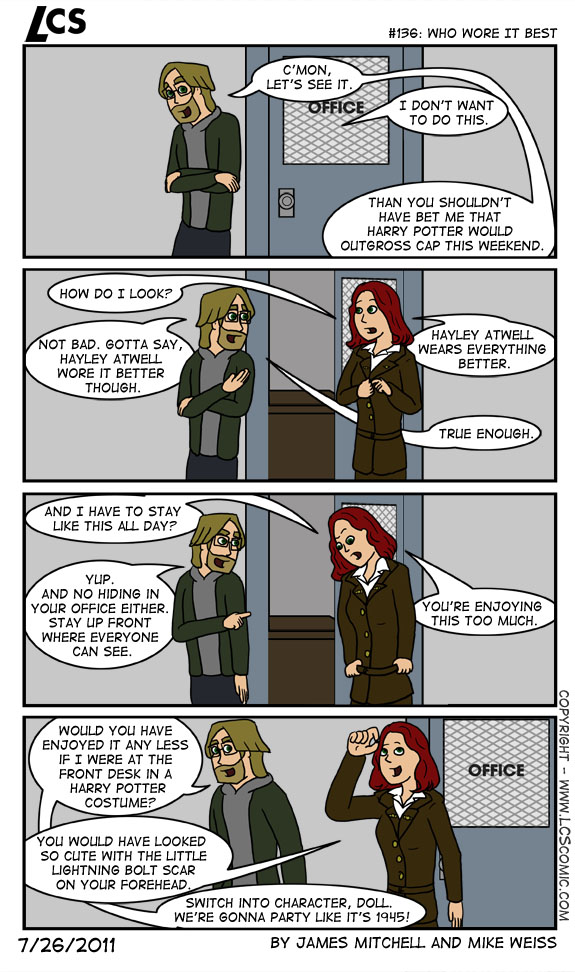 James: I had planned on doing a SDCC page today, but Cap was too good to not rant about. Easily my favorite Marvel movie to date. Marvel Studios is knocking these flicks out of the park. Just a few years ago (prior to the success of Iron Man) I never would have believed I’d see a Captain America and Thor movie come out in the same summer and I certainly wouldn’t have expected either of them to be any good. But what’s really exciting about this summer is the way they set up next summer.

Major props to Chris Evans who plays Cap pitch perfect, the little kid from Brooklyn who just wants to do what’s right and suddenly has the power to do it. This is a break out role for Evans who up until this point has seemed to always play different variations of the smug, kind of douchey character (a la Johnny Storm and Lucas Lee), but here he pulls off sincere, kind, and heroic well beyond my expectations. “I don’t want to kill anyone, I just don’t like bullies” is a line that a lesser actor in a lesser production would butcher. Go ahead, try to picture Ryan Reynolds delivering that line right now. Pretty bad, right? I can’t wait to see Evans’ Cap play off of RDJ’s smarmy Tony Stark and Hemsworth’s bombastic Thor. And Joe Johnston deserves a lot of credit for making this period piece feel simultaneously authentic (in spite of the laser guns) and accessible.

But that brings me back around to discussing the incredible work that Marvel Studios is doing. Thor, Cap, and Iron Man were all given to the perfect directors. Guys who could really get to the heart of these characters and draw out the essence of each of them, then translate that for a mainstream audience. I have never had more confidence in their choice of Joss Whedon to helm The Avengers than I do at this moment.

Mike: What James said. Captain America was a great movie, I loved almost every second of it. I am amazing we are coming to an Avengers movie one built up by individual films leading into a group movie. Us comic fans have been waiting for Avengers or Justice League to do just that. I never really thought it would happen, it seemed to be an impossible dream. Now Marvel is pulling it off making great film after great film. I just can’t wait to see this dream come true. And though Cap’s post credit scene wasn’t that great, the post,post credit scene was awesome and gives hope that Avengers will be just as amazing as the movies that lead up to them. Great to see a movie for the Star Spangled man done right.