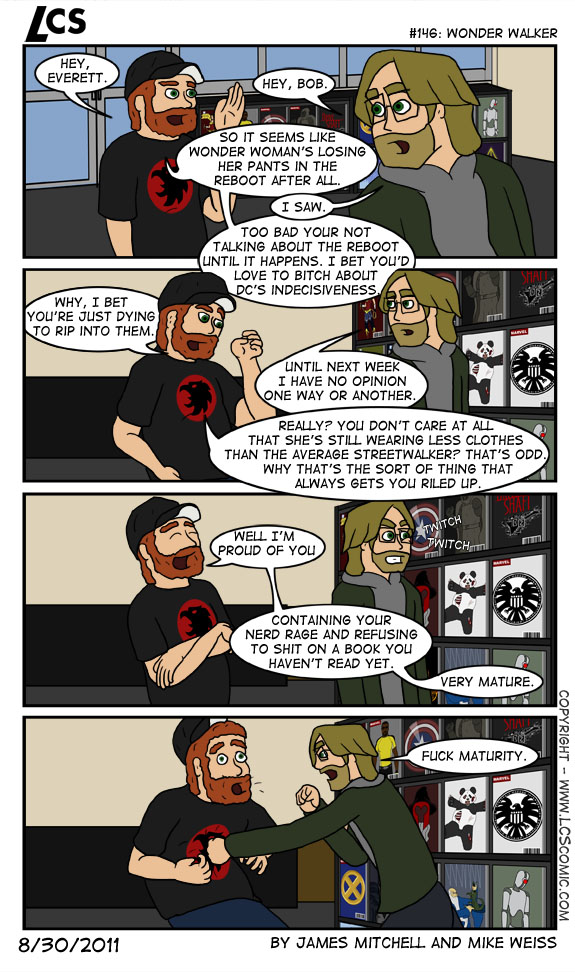 Mike: I was really hoping James would do a Bob comic on this. Speaking of, DC what the fuck? Really? You have a chance to reinvent this character and the best thing you did (give her pants) you took away? You really ruined a chance to have this character taken seriously by the new readers you’re so desperate to get.

In other news Google just gave me $100 to spend on advertising. Now we just have to think of the best way to advertise this site.

James: I miss Bob when he’s gone. Anyway, I will admit to being a bit miffed that DC is putting Diana back in the bloomers. I will admit that I am somewhat baffled by the fact that they would put out previews and promotional images then reverse their decision; kowtowing to what, for the sake of my sanity, I have to believe are imaginary pro-panties groups.

But I’m still gonna read that book. Read this interview with Brian Azzerello. I particularly like one word he used in that interview. “Sanitized”. That’s a perfect description of how the Greek pantheon has been portrayed in DC comics to this point. But now we get Diana protecting humanity from the wrath of mythology’s most infamously petty, vindictive gods? Fuck. Yes.