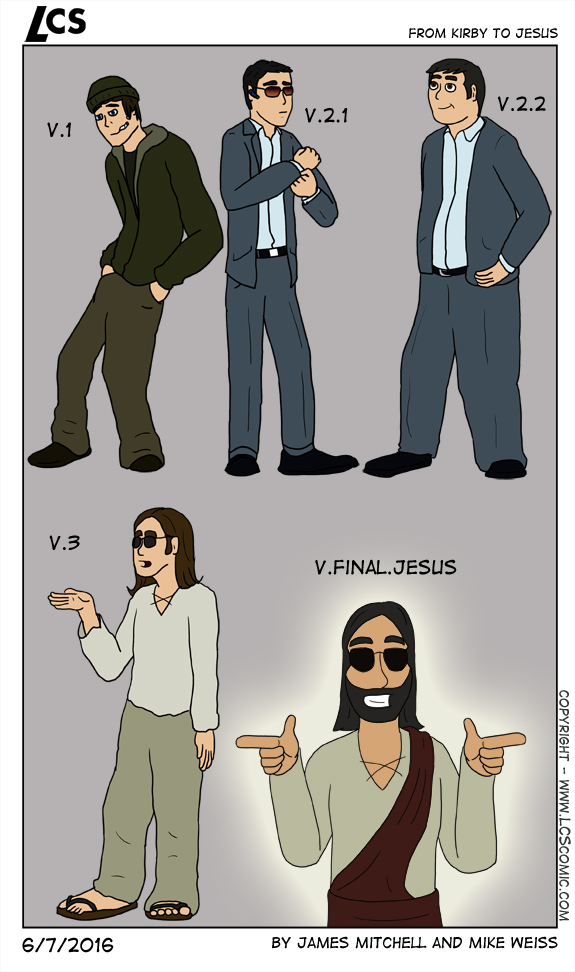 Mike: So my wrist is now at 100%, normal pages should resume on Friday. For our final filler I’m giving you a look into the earlier days of LCS. Back before James gave up any idea of ever have a buffer with the comics and I was actually clued into what was gonna happen with the story I decided to make concepts for characters to discuss wit James. Among the original cast in James’ initial pitch (Beck, Mickey, Ed, Everett, Grace, Katie, and Don) was a pot dealer named Kirby. So since I had the time I decided to try and design the character well before he’s introduced. V.1 was a very stereotypical drug dealer design and I was not happy with it. Then I decided to try the complete opposite, so V.2.1 was a character designed to be very timely, efficient, and well dressed basically the opposite of every pot dealer I’ve seen in media. I based him off Michael Weston from Burn Notice and sent both designs to James. James liked the idea of V.2.1 but asked if I could make him heavier because he originally intended Kirby to look like someone he knows. Then as we came closer to Chapter 8 James decided to change Kirby’s character to someone else he knows. A person who is always talking philosophy, thus V.3 was based of Jacob from Lost with long hair and sun glasses. Then the moment I received the script for Page 86 the first thing he wrote was “Here’s 86. I decided to go another way with the dealer. A REALLY different way” So he scrapped everything and just made him Jesus, I took the V.3 design and made it more Jesus-y and the rest is history.