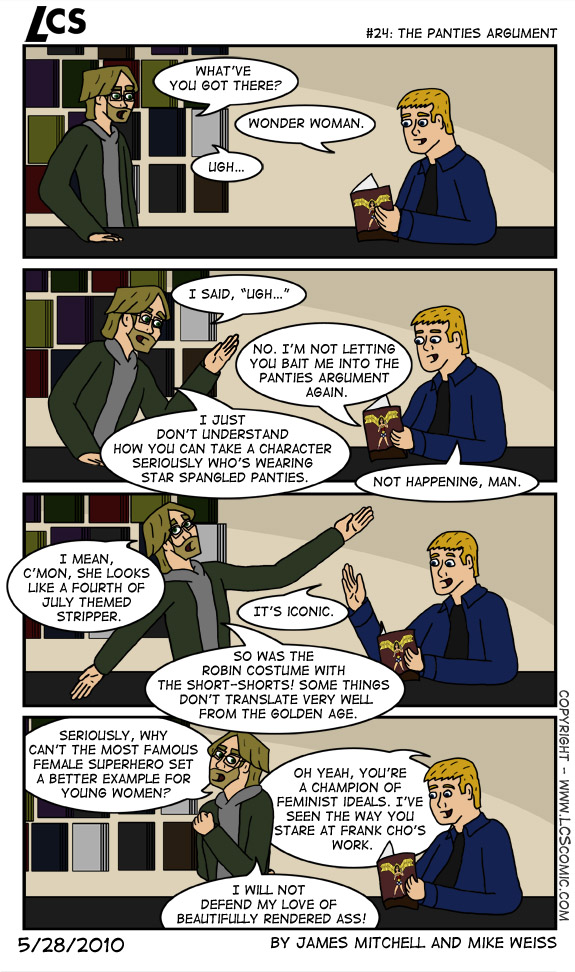 Mike: Wow, Beck has impeccable concentration talking to Everett while reading a comic book. On the Panties issue, I’m fine with it in comic books and cartoons. You can get away with that in those medias, but if/when they make a movie, she should have skin-tight pants, then everyone is happy.

James: I’ve tried to get into Wonder Woman a few times, but I’ve never been able to maintain even a passing interest in her. Which sucks because she’s the preeminent female superhero and I’d love it if I could learn to like her. I don’t think it has anything to do with her costume. It is awful, but it’s not as bad as say, Wonder Man‘s various costumes. I’ve just never been able to relate to the character. How could I? She’s a mystical princess from a fantasy utopia come to fix “man’s world”. The only words I can relate to in that sentence are the prepositions. She’s better than us. Not just physically, but mentally and emotionally as well. And she KNOWS it. You can practically here her tsk-tsking her villains and supporting characters like a superpowered Marie Barone. That’s not a fun read for me. Like I said, I wish I could get into her, but not even Gail Simone could draw me in. If Simone couldn’t make me care than I don’t think anyone ever will.