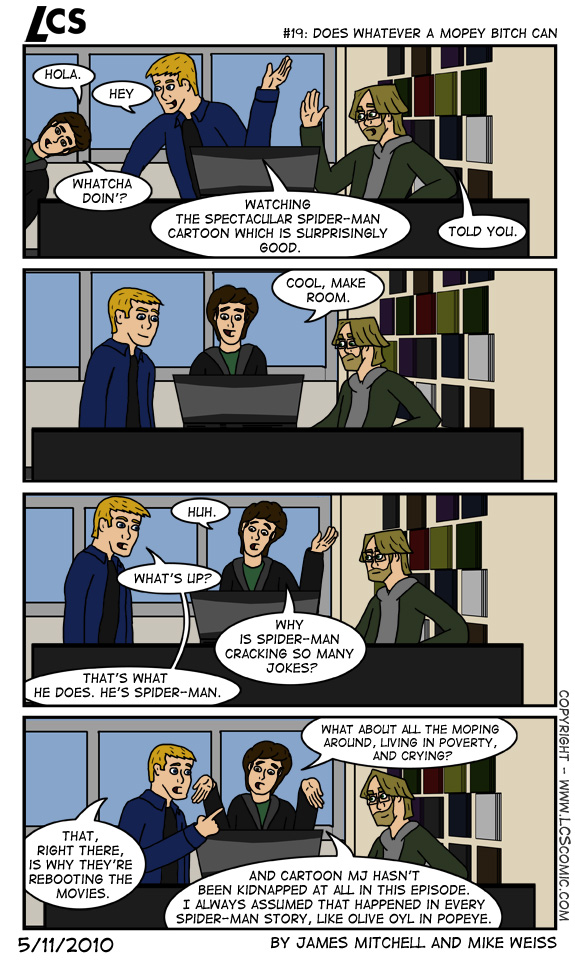 Mike: I generally disapprove of the reboot mainly because it seems to be replacing remakes as the shining example of Hollywood’s inability to be creative. Though most reboot that have happen have been great, I’ve always felt that a sequel could easily fix any problem the original had. You can change directors, change actors, but don’t redo a story. The Incredible Hulk is a good example of reboot done right. It could have easily been a sequel to Ang Lee’s HULK without losing anything that made it great. I preform a Requel than reboot any day of the week. In the case of Spider-man, Spider-man 3 left such a bad taste in my mouth I have almost not motivation to watch Spectacular Spider-man even though it’s a fantastic series. So I’m okay with them rebooting it. But when FOX announces they wish to reboot Fantastic Four to make it “Darker” and “Edgier” it fills me with a murderous rage. Sure the first two weren’t masterpieces but they were still fairly good, dammit. I just hope this trend doesn’t go crazy, but as long as we aren’t watching the same story over and over I can live with it.

James: I’m at the other end of the spectrum. I’m psyched about the Spider-Man reboot and looking forward to seeing a new take on the old webhead. I was in high school when the first Spider-Man hit the big screen and I loved every second of it. How could I not? Even though I wouldn’t get into the comic books themselves for a few years, I grew up on the 90’s cartoon and the video games that the crappy 90’s comics spawned. Separation Anxiety, bitches! But of course, the thing that really put the movie over the top was the CGI. Spider-Man looked amazing as he swung through New York. The original Superman movie’s tag was “You’ll Believe A Man Can Fly!” Well, Spider-Man made us believe a man could webswing. And that was all it really needed to do to make box office history. The melodrama, while a little over the top, worked because his origin story is inherently quite sad. The same melodrama was decidedly less effective in Spider-Man 2, but the movie was carried by the performance of Alfred Molina who played a magnificent Otto Octavius. In the third movie Sam Raimi’s same old, same old was coupled with 3 terribly uninteresting baddies and the whole thing collapsed under the weight of its own FAIL. There was no foreseeable way to continue the series beyond that point. Seriously, which of Spidey’s 3rd tier villains would you trot out there to kidnap MJ in the fourth movie?

I love Sam Raimi. The man gave us The Evil Dead, for fuck’s sake. But his Spider-Man wasn’t any fun. It tried to be fun. Pete danced! That’s fun, right? No, that was just ANOTHER lead in to Pete and MJ drama. Cause we hadn’t seen enough of that. I hope Marc Webb learns from Iron Man’s recent box office success (more on that soon) and gives us a Peter Parker whose life isn’t a swirling emo-storm. Superhero comics, grimdark stalwarts like Batman and Punisher aside, are inherently silly and fun adventure stories. The movies should be the same. There’s no reason to fight the source material like that. When you do you end up with Spider-Man 3 or Superman Returns, movies that took themselves way too seriously and bored millions of people so badly that they had to be rebooted.