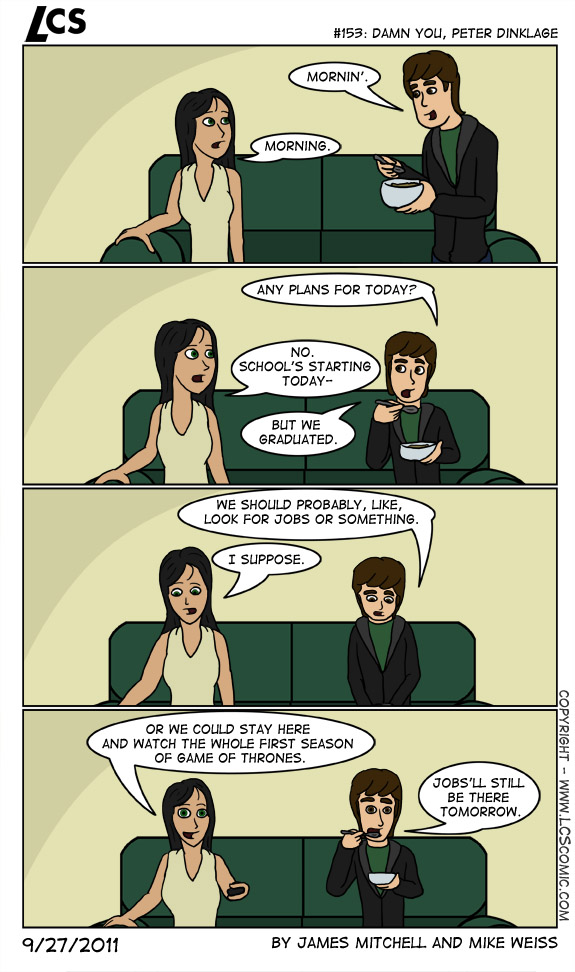 James: Indeed. Game of Thrones, however, is awesome. Just before the HBO series came out I ran out and picked up the book so I could be that guy who said, “It was good, but the book was better.” I’ve never been that guy and I kind of hate that guy, but I wanted to walk a mile in his jackass shoes. The book was remarkable and I immediately read A Clash of Kings, A Storm of Swords, and A Feast for Crows. Then I watched the show. The book certainly has more depth, but I can’t imagine a better or more faithful translation of the story. The casting was perfect, the acting was often spellbinding, and the direction was flawless. When the fifth book of the series, A Dance with Dragons, came out I picked it up and blew through it in a few days. It was my favorite book in the series since A Clash of Kings. Fantasy, traditionally, has not been my genre. I’m one of the few who didn’t go gaga over Lord of the Rings and I generally prefer fantasy’s sister genre sci-fi for my flights of fancy, but A Song of Ice and Fire is unlike any fantasy series I’ve ever encountered. I cannot recommend the books or the TV show highly enough. So ends my nerd rant.